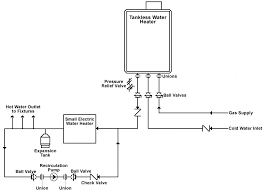 Thermal expansion tanks are typically installed in conjunction with storage water heaters, but are they needed with tankless water heaters? This issue can sometimes be overlooked. Let’s look at the specifics.

Section 607.3 of the 2012 International Plumbing Code (IPC) provides the requirements for controlling pressure caused by thermal expansion. The requirements contained in paragraphs 607. 3 and 607.3.1 do not specifically distinguish between thermal expansion from a storage water heater, a tankless water heater, or other system equipment. Paragraph 607.3.2 does specifically require a device for controlling pressure “when there is a backflow prevention device, check valve or other device installed on the water supply system utilizing storage water heating equipment such that thermal expansion causes an increase in pressure.”

Here is a thorough explanation provided in the 2012 IPC Code Commentary.

Note that this section (607.3.2) identifies only “storage water heating equipment” as the generator of hot water. While this appears to imply that thermal expansion-induced pressure increases are only created by storage tank water heaters, this is not the case. A question that is frequently asked is, “Does a water distribution system with tankless water heater require control of pressure increases caused by thermal expansion?” The answer is provided in the following two examples.

System A: Water distribution system with a tankless, on-demand water heater (electric or gas) without a storage tank. In this system, water is heated only when a hot water outlet is open. Because the water distribution system is now an “open” system (i.e., a hot water outlet is open), any thermal expansion is relieved through the open hot water outlet and no pressure increase can occur. When the outlet is closed, the system becomes a closed system but, since the flow has ceased, the tankless water heater stops heating the water. Therefore, methods for controlling pressure increases due to thermal expansion are not required.

Note: The Uniform Plumbing Code requires thermal expansion tanks if there is a check valve, pressure regulator, or backflow preventer installed in the main supply line, regardless of the type of water heater. So the adopted municipal code must be determined to ascertain whether a thermal expansion tank is required.

Note: The pressure relief valve on a water heater cannot be used as the device to control the pressure.

Are there other situations that you have encountered where thermal expansion tanks are needed with tankless water heaters?

LEAVE A COMMENT: Thanks for leaving a comment. All comments are moderated. Your email address will NOT be published. Let's have a personal and meaningful conversation. Cancel reply

Loading Comments...
Share this ArticleLike this article? Email it to a friend!
Email sent!
We use cookies to ensure that we give you the best experience on our website. If you continue to use this site we will assume that you are happy with it.OkPrivacy policy