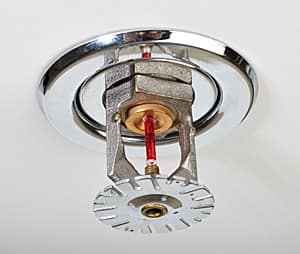 There is much debate in the industry and within code committees about the reuse of sprinklers. A recent article on the NFPA website provides clear guidance about past and current code requirements for sprinkler reuse. They nailed it! Provided below is the article in its entirety (emphasis – mine).
BY MATT KLAUS

A hot topic over the last two revision cycles of NFPA 13, Installation of Sprinkler Systems, has been the reuse of sprinklers. Over the last 10 to 12 years, there has been a reduction in new commercial construction as many companies sought more cost-effective alternatives, including renovating or rehabilitating existing buildings. Many of these renovated buildings had automatic sprinkler systems in place when the new owners moved in. Due to the relocation of partitions, suspended ceilings, structural members, and other architectural features, however, sprinklers may need to be relocated to comply with the location and spacing requirements of the standard.

This raises a number of questions, including whether or not a sprinkler can be reused after it’s been removed from the system. In some cases, the sprinkler may be detached from the system for only a matter of hours, and in other cases, it could be months. Regardless, the duration that the sprinkler is out of service is not the deciding factor in whether it can be reinstalled. According to NFPA 13, that depends on whether torque was applied directly to the sprinkler when it was removed.

During the development of the 2013 edition of NFPA 13, the Technical Committee for Sprinkler System Installation Criteria added language that said, “When a sprinkler has been removed for any reason, it shall not be reinstalled.” While this language seems cut and dried, there was a nuance to it that was brought out in the committee discussion during the second draft meeting. The intent of the committee was to prohibit the reuse of sprinklers when torque was applied directly to the wrench boss of the sprinkler during its removal, a practice that can damage the sprinkler. In situations where sprinklers are on sprig ups, return bends, drops, or other fittings, the sprinkler and its associated fitting(s) could be reinstalled provided the sprinkler was removed by applying torque to a fitting rather than the sprinkler itself. While this language was not explicit in the 2013 edition, the technical committee revised the text to the 2016 edition to spell this out more clearly.

The logic behind this requirement is that applying torque to the sprinkler itself could lead to damage to the threads, seat, bulb, or other critical components. In many cases, this damage is imperceptible to the naked eye, so a visual inspection would not be sufficient to determine if the device has been compromised. A damaged sprinkler that is reinstalled could lead to an accidental discharge during a hydrostatic test or when the system is placed under working pressure.

During the development of the 2016 edition, the committee further developed this concept by including a new allowance for dry sprinklers to be put back into service after being taken down. Dry sprinklers are more expensive than a standard spray sprinkler installed in a wet system, and the manufacturers and other committee members were sensitive to forcing owners to buy new dry sprinklers simply because they needed to be relocated. The standard now has language that allows dry sprinklers to be put back into service where they were taken down in accordance with the manufacturer’s instructions.

This issue has been the subject of some intense discussion by the technical committee, which is trying to find a balance between cost and safety. The committees are preparing for the development of the 2019 edition of the standard, so if you have any input on this topic, share your opinion by using the public input/comment process on the NFPA 13 document information webpage.

Share this ArticleLike this article? Email it to a friend!
Email sent!